An In-Depth Exploration of the Marlborough Sounds

Famed for the breath-taking beauty of their winding cobalt waterways, iconic landscapes, lush native forests, wildlife and remote coastlines these regions are also rich in early New Zealand history and the location of some of the country's most important conservation efforts.

Formed by a system of submerged valleys carved out following the last ice age around 10,000 years ago, the scenic playground of Marlborough Sounds encompasses some 1,500-kilometres of forested coastline, sheltered inlets and bays awaiting exploration, many only accessible by sea. The union of three main bodies of water - Queen Charlotte, Kenepuru and Pelorus Sounds - Marlborough Sounds has more than 50 Department of Conservation managed reserves and several predatorfree wildlife sanctuaries.

Just 500 treacherous metres from the mainland, d'Urville Island was named after French admiral Jules Sebastian Cesar Dumont d'Urville and his ill fated passage of the infamous French Pass in January 1827. After several near misses while seeking passage inside the island, he came close to losing his ship Astrolabe after hitting the reef. Now a possum, rat and weasel-free conservation reserve, d'Urville Island is one of the last strongholds of the critically endangered Long-tailed Bat and provides a respite for the world's rarest shag - the King Shag - and several other species of rare birds and geckos.

A voyage of adventure and discovery awaits in the Marlborough Sounds. 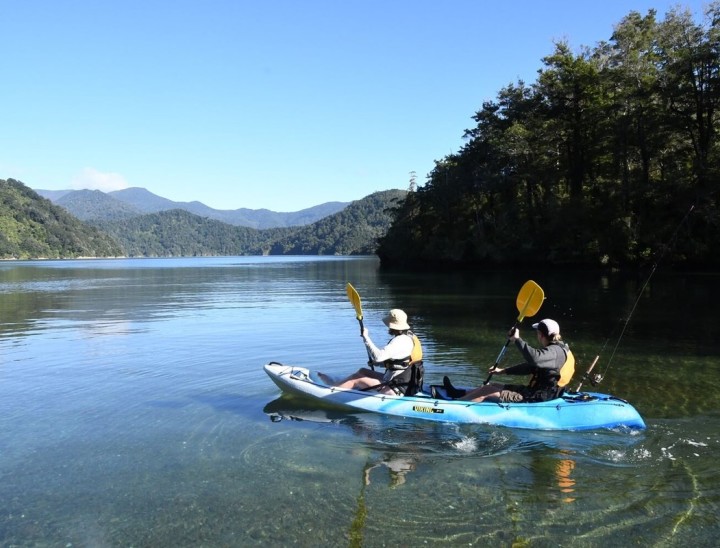 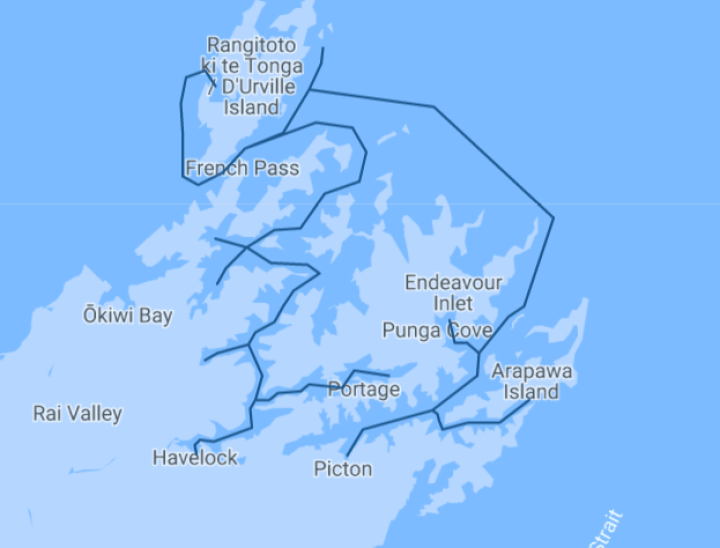 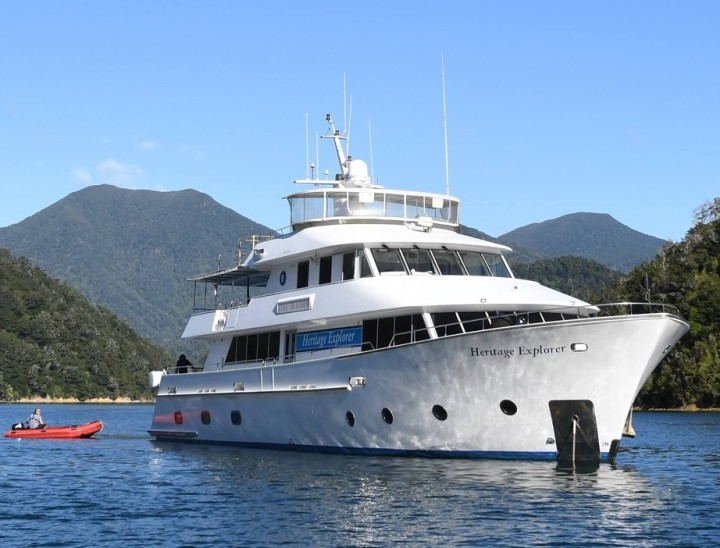 Day 1: Blenheim
Make your way to the designated meeting point in Blenheim for your transfer to Heritage Explorer in Picton (times and meeting point will be confirmed with your voyage documents). The captain and expedition team will be waiting to welcome you aboard Heritage Explorer and show you to your cabin. You will have the opportunity to familiarise yourself on board then join the captain on the bridge or fellow travellers on deck as we set sail along Queen Charlotte Sound this afternoon. ***Note: Some voyages will operate the itinerary in reverse.***

Days 2 to 3: Queen Charlotte Sound
First sighted in 1642 by Abel Janszoon Tasman while seeking shelter for his ships Heemskerck and Zeehaen from a storm near d’Urville Island, it was Captain James Cook who would first set foot here aboard the Endeavour during his five visits to Ship Cove, his New Zealand base between 1770 and 1777, in what he would call Queen Charlotte Sound. We spend two full days exploring the waterways and islands of scenic Queen Charlotte Sound with opportunities to head ashore and walk a section of the Queen Charlotte Walkway as well as search for birdlife on the predator free islands. A visit to Tory Channel brings the whaling history of the Perano Whalers to life. We also plan to visit Ship Cove and learn of its history, exploring the region and visiting Captain Cook’s memorial inaugurated in 1913. Another conservation success story, Blumine Island has seen the translocation of several rare bird species including the once widespread Orange-fronted Parakeet, now New Zealand’s rarest parakeet, which were translocated to the island between 2011 and 2012. Also thriving on the island are South Island Saddleback, brought back from the brink of extinction last century from just 36 birds rescued in 1964, descendants of these birds were translocated to Blumine Island in 2009.

Day 4: d’Urville island
Today we sail through the iconic French Pass and the wake of French Explorer Dumont d’Urville and then explore the island named in his honour. The outermost island in the Marlborough Sounds, d’Urville Island features imposing sea cliffs along its west coast, a high mountainous backbone and the fastest moving tidal flows in New Zealand between the French Pass tempered by some of the country’s finest peninsula scenery. Dolphins and New Zealand Fur Seals are frequently seen in the waters surround the island and it was here that Pelorus Jack, the endearing Risso’s Dolphin who famously stole the nation’s heart, guided ships across the dangerous waters of Cook Strait between 1888 and 1912.

Days 5 to 6: Pelorus Sound
The largest in the Marlborough Sounds, Pelorus Sound’s main channel winds some picturesque 55 kilometres south between steep verdant hills from Cook Strait to Havelock. Boasting 380 kilometres of shoreline, the endless bays and sheltered coves of Pelorus Sound are perfect for exploration. Venturing into Pelorus Sound we head to Ngawhakawhiti Bay where nature surrounds us and it’s possible to get a glimpse of what the sounds would have been like before the native forest was cleared. The more active are able to enjoy the walking part of the Nydia Track before we explore Nydia Bay. On the final night we will enjoy a farwell dinner.

Day 7: Blenheim
We arrive into the inner reaches of Pelorous Sound this morning. After a final breakfast and farewells, a Zodiac tender takes you ashore at Havelock where a transfer to a central Blenheim drop off point or the airport waits. In case of unexpected delays we ask you not to book any onward travel from Blenheim until after midday today. During our voyage, circumstances may make it necessary or desirable to deviate from the proposed itinerary. This can include poor weather and opportunities for making unplanned excursions. Your Expedition Leader will keep you fully informed.

Includes:Landing fees, pre and post cruise transfers, all on board ship accommodation with meals and all shore excursions and activities. GST, house drinks and expert on board naturalist guides. Pricing per person in NZ$.