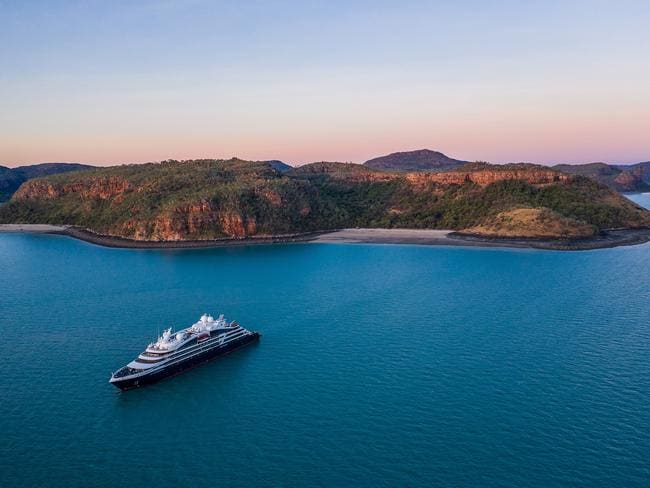 Prices are in Australian Dollars, Per Person, Twin Share

Last staterooms for 2022 and departures now available for 2023!
Set sail for the wild and grandiose landscapes of the Kimberley, following this exceptional PONANT itinerary. From Broome to Darwin, embark for an 10-night expedition. In one of the most picturesque parts of the region, the Hunter River, you will see wild mangrove forests where saltwater crocodiles live along with many species of birds. The highpoint of this cruise will undoubtedly be the discovery of the King George River and the majestic Twin Falls, the highest single
drop waterfall in Western Australia. You will also visit Collier Bay, where you will be able to admire a spectacular example of the impact of the tides cascading in mini-waterfalls as the entire Montgomery reef appears to rise from the turquoise blue waters of the bay. Your ship will take you along one of the most spectacular coasts in the entire region. With their falls, abrupt gorges, savannah, and calm waters, the wild lands of Kimberley are the promise of an exceptional adventure.

Day 1. Broome. Embarkation.
Located in the northwest of the Kimberley region and in the far north of Western Australia, the town of Broome is reputedfor its history and its glorious pearling era. Broome is alsofamous for the “Staircase to the Moon”, an optical illusion created by the Moon reflecting on the sand banks at low tide, like a staircase climbing up towards the sky, a unique spectacle provided by nature.
Day 2. Lacepede Islands, Australia.
The Lacepede Islands are Western Australia’s most important breeding habitat for Green Turtles, and have been named by Bird Life Int. as an Important Bird Area. The breeding colony of Brown Boobies is possibly the largest in the world. Birds breeding on the islands include Roseate Terns, Masked Boobies, Australian Pelicans, Lesser Frigatebirds, Eastern ReefEgrets, Silver Gulls, Crested, Bridled and Lesser Crested Terns, Common Noddies, Pied and Sooty Oystercatchers. Due to the sensitive nature of the environment, landings are prohibited
on the Lacepede Islands. Join your expedition team for a guided Zodiac® tour to view the prolific wildlife.
Day 3. Collier Bay, Australia.
Shaped by the massive tidal movements the region is renowned for, Collier Bay is a a photographer’s paradise. With a tidal range exceeding 14 metres recorded near Yule entrance at the southern end of the bay, they are among the largest in the world. Nestled in the centre of the Bay is
Montgomery Reef, the world’s largest inshore reef system. As the tide falls a raging torrent of water cascades off the top of the reef, creating turbulent ‘rivers’ and mini waterfalls. At the Southern end of the Bay, Talbot Bay is home to the world’s only ’Horizontal Falls’. Hidden in the many caves and grottos of this ancient landscape are a multitude of ancient Rock Art galleries. Here you can find spectacular examples of the Wandjina and Gwion Gwion styles.
Day 4. Careening Bay, Australia.
Named by Lieutenant Phillip Parker King after his ship, HMC Mermaid, was careened there during his third voyage of discovery in 1820. At high tide, he ran the Mermaid onto the sands where his crew worked hard on repairs before refloating the vessel. The ship’s carpenter carved the name of the vessel and the year into a conspicuous boab tree. The famous boab tree is now 3 metres wide and National Heritage listed. A reminder of a by gone era of exploration.
Day 5. Hunter River, Australia.
Lined with ancient rainforest pockets, pristine mangroves and mosaic sandstone cliffs, the area is considered to be home to some of the most pristine mangrove forests in the world, containing up to 18 different species, supporting a rich and diverse fauna. The sandstone escarpment at the river mouth, rises over 200 metres high before giving way to extensive mud banks and mangrove forests, home to numerous bird species and the iconic saltwater crocodile. Our Expedition Team will share their knowledge with you as you explore this pristine mangrove environment by Zodiac®. You will also have the opportunity to reach the Mitchell Falls by helicopter from Naturalist Island beach on an optional excursion.
Day 6. Swift Bay, Australia.
The Bonaparte Archipelago, is a stunningly rugged maze of islands stretching almost 150 km along Western Australia’s remote Kimberley coast. Its colour and scale conspire to take ones’ breath away. Its distant location has meant it has remained an unspoilt and remarkably pristine location to explore and experience. Join your expedition team ashore for a guided walk to a number of rock art galleries depicting these unique rock art styles.
Day 7. Vansittart Bay, Australia.
Jar Island contains ancient rock art galleries depicting the Gwion Gwion style unique to the Kimberley region. It is generally thought that this art may extend back to over 30,000 years before our time and represents the first wave of seagoing colonisers of the Australian continent. As it is, these are the oldest detailed depiction of human figures in the world. Join your Expedition Team ashore for a short walk, past some fascinating rock formations, to the site of the
Gwion Gwion art galleries.
Day 8. King George River, Australia.
The journey up the King George River is nothing short of breathtaking. The 80-metre-high sides of the gorge display varying degrees of weathering of the ancient sandstone. The colours and textures of the gorge change with the light as you travel further up the river creating a continual changing scenery. The journey culminates at the King George twin falls; the highest single-drop falls in the whole of the Kimberley. Your Expedition Team will escort you in either the Zodiacs® or ship tenders to the foot of the twin falls, and explain all about the stunning geological formations of the canyon.
Day 9. At Sea.
During your day at sea, make the most of the many services and activities on board. Treat yourself to a moment of relaxation in the spa or stay in shape in the fitness centre, be tempted by the swimming pool or a spot of sunbathing. You will also have an opportunity to enjoy the conferences or shows proposed on board, to do some shopping in the boutique or to meet the PONANT photographers. As for lovers of the open sea, you will be able to visit the ship’s upper deck
to admire the spectacle of the waves and perhaps be lucky enough to observe marine species.
Day 10. Darwin. Disembarkation.
Located in Australia’s Northern Territory, also known as the “Top End”. Darwin is a beautiful tropical city, a melting pot of people and cultures, over 50 different cultures live and work side by side that prides itself in its unique and friendly laidback lifestyle.

Also available: Australia’s Iconic Kimberley - Southbound
Darwin - Broome | 10 nights aboard Le Soléal and Le Lapérouse Last staterooms for 2022 and departures now available for 2023! On this southbound itinerary departing from Darwin, you will sail towards Pulau Meatimiarang for a technical stop, before sailing on to Wyndham. Here in the northernmost town in Western Australia you will be surrounded by some of the most spectacular landforms, rivers, and wetlands in the Kimberley. You will also have the opportunity to take part in three optional excursions, including a Bungle Bungle Scenic Flight, Ord River Tour or an El Questro Tour. You will then resume your voyage along the
Kimberley coast, taking in its breathtaking phenomenon's, wildlife, and ancient history. 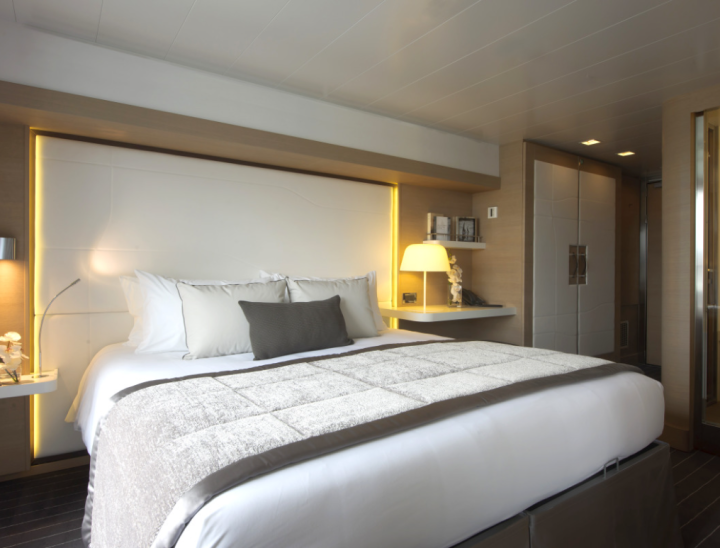 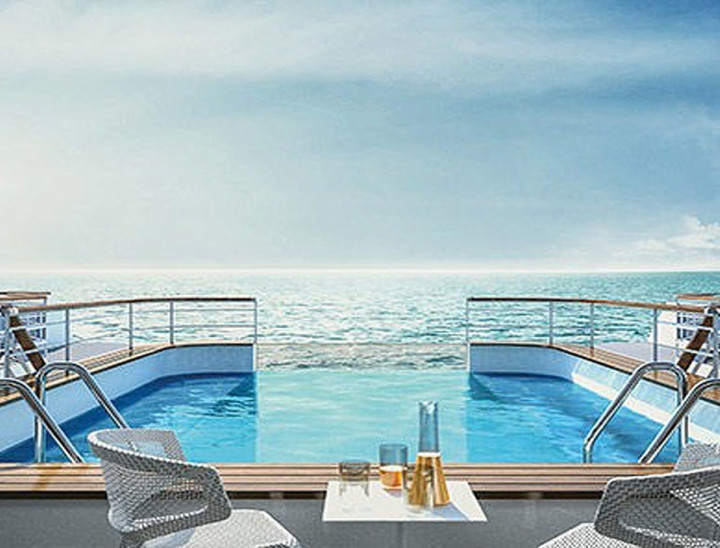 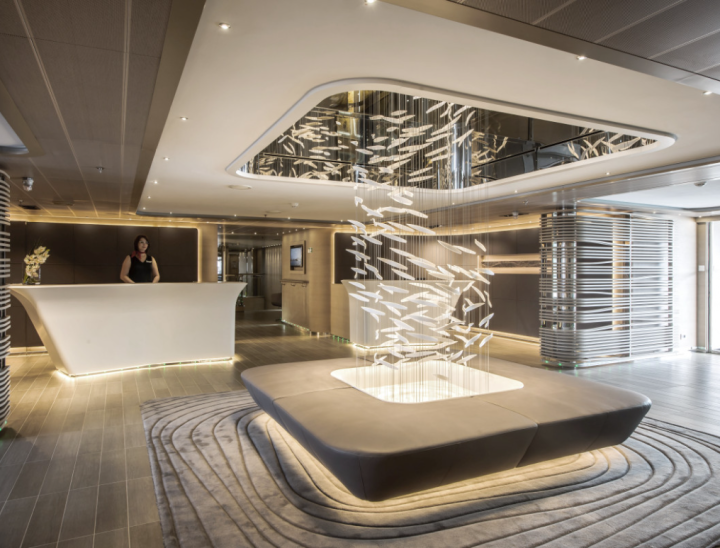 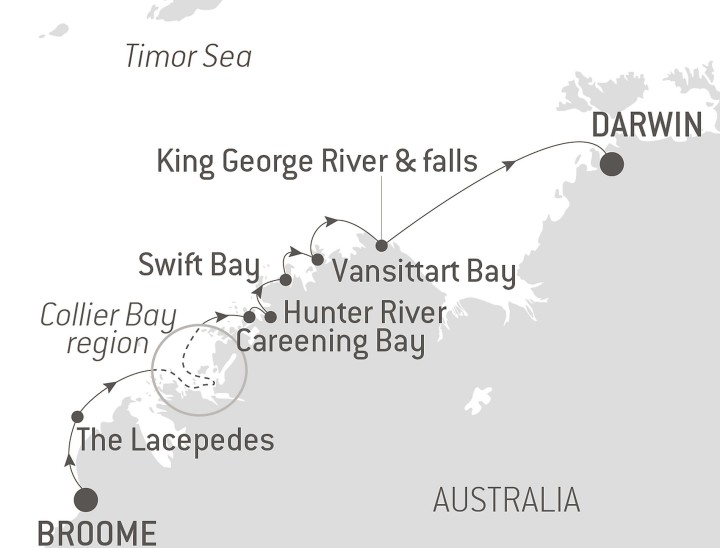 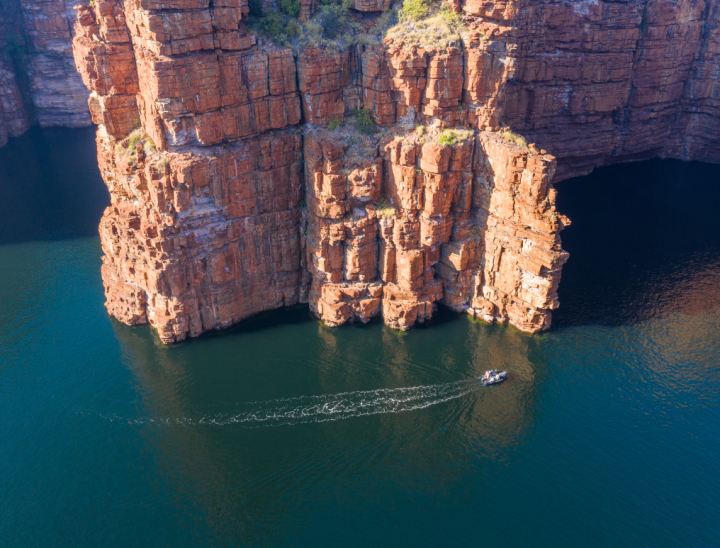 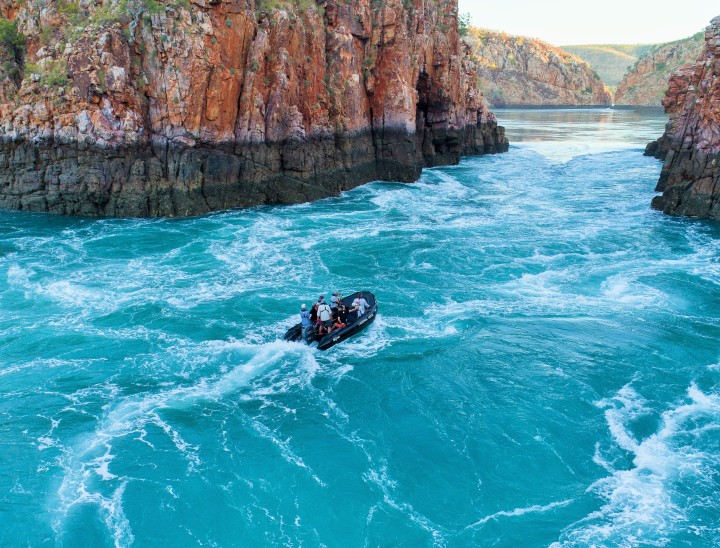 Prices are in Australian Dollars

AUD$9,310 per person twin share. This is based on a Superior Stateroom, on the 07th June 2022 departure, Broome to Darwin onboard Le Soleal with a 30% Ponant Bonus